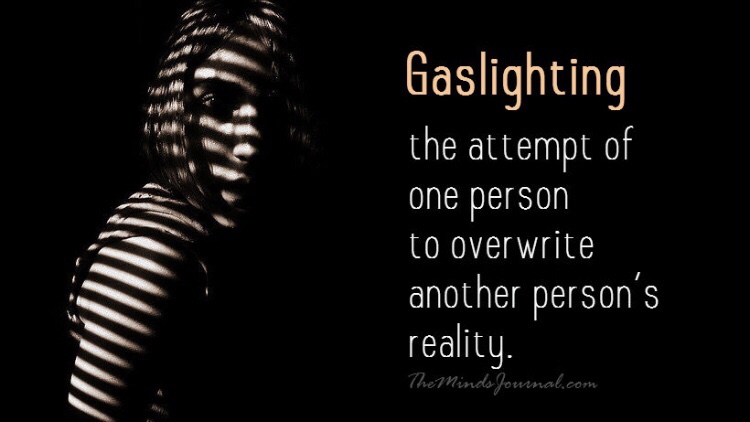 Gaslighting is a manipulative tactic which a person uses to gain more power over an individual.

It is a form of emotional abuse which takes lying to a different level. A pathological liar is equally as dangerous but gaslighting is one of the most harmful forms of mental and emotional abuse.

The aim is clear, it is to confuse and manipulate so the perpetrator can gain full power of their victim.

Eventually the victim becomes so fearful of questioning what happened and pulling that person up on anything that ‘just doesn’t make sense’ that they become silent and an easier target for a perpetrator to manipulate and control.

Not only will they do things that just do not make sense like in my Pathological Liars post but they will deny things you KNOW happened.

It may start very subtle. For example an agreement for you both to do something Saturday but then later they say different ‘um no I never said that, I said Sunday.’

It hardly seems a big deal at the beginning of a relationship and if it rarely happens and maybe you did mishear or they got confused themselves then it might not be gaslighting. If it is a regular thing then it’s a major red flag.

Other scenarios to look out for:

‘I really like Chinese’ they may say, you later book a Chinese restaurant only for them to be uninterested and be adamant you got it wrong and they are not fond of Chinese food.

‘Yes I’m excited to go out with your friends on Sunday’, Sunday comes and they then say ‘no we agreed we weren’t going to go. It was your idea to not go.’ They can literally fabricate a whole story, by saying ‘you said something’ which you know you didn’t! If you question them they continue more lies, getting angry and accusing you of going mad. I had to hear ‘joke’ muttered under his breath, ‘as if I said that’ whilst mocking laughing at me. It is a very dangerous place for your mind to be.

Over time the denying blame and lies get more frequent. They will deny something they said just 5 minutes before hand. ‘No I didn’t say that’ again with laughing. It is completely exhausting and with someone this manipulative that perhaps could be mistaken for a misunderstanding by a normal person, it just doesn’t stop there. He would continue to deny, and lie. Even if I had dropped it, he would go on for a period of time muttering how wrong I got it. Guilt maybe or maybe feeling like he hadn’t done enough to ‘convince me I was wrong.’

They twist reality and they lie so well. Look you straight in the eye and you start to think that maybe YOU have got it wrong. They cannot ever take responsibility and if they do realise that they are in the wrong and they can’t get out of it it suddenly it becomes ‘no big deal’. The topic is dropped and then something will be bought up concerning something you did wrong to throw you off track ‘well last week you didn’t do the washing up like you said you would’ for example. A distraction tactic to forget what has been said.

Sometimes they will be charming and calm when gaslighting you, other times they can be disgusting and vile. Pull them up on disrespectful behaviour and suddenly you are over sensitive. They didn’t say it the way you took it and once again it’s you going mad.

They can also project their behaviour onto you. This is known as projection where they will accuse you of the very thing they are guilty of. ‘You have a split personality,’ ‘you have no manners or respect’ and his favourite ‘I’ve asked you to do something as a couple but you are just not interested.’ Of course it was him who blew hot and cold, him who spoke to me with complete disrespect and him who left me isolated and not interested in doing anything together in the relationship. Yet he is convinced it’s all me and I am a bad person. This is why he is never around because I lie and I will never have anyone treating me good when I behave like this.

I really lost count of the number of times we had conflict like this, it was regular. At least once a day would not be an exaggeration. ‘But you said’, I would cry ‘That didn’t happen’ I would scream, ‘You’re sending me mad.’ Even with that I was told I was sending myself mad. These conversations leave you completely confused and you often question your own self about what even happened. Unable to recite what was said or even how you ended up in the state you are in. You are the one who looks crazy!

Despite knowing what happened, and standing your ground it is still very very exhausting and draining. Like I said, events in his head were ALWAYS completely different to reality. Even though often I KNEW, I still questioned reality and I was so adamant I wanted to hear the truth from him. I wouldn’t get it though. He even invented in his head that last year I did a 6 week course where I got a certificate at the end of it. It did not happen!! He failed in convincing me it did but it sure as hell still bothers me that he honestly sees that as reality!

Gaslighting is a HUGE topic and I will write more about it in my book but it is important to remember you are not going mad.

Educate yourself, knowledge is power! 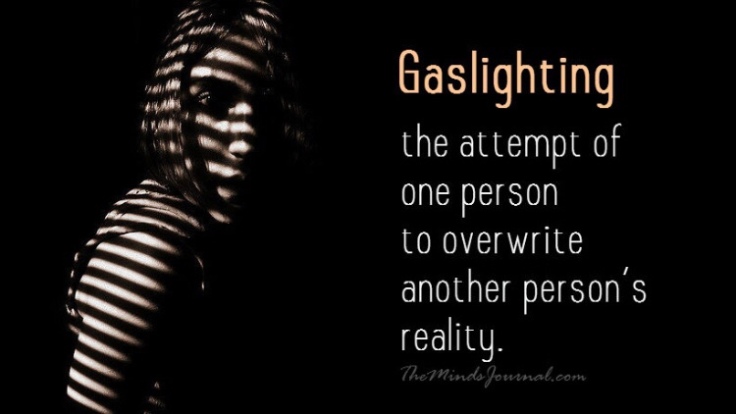 One thought on “What is gaslighting?”