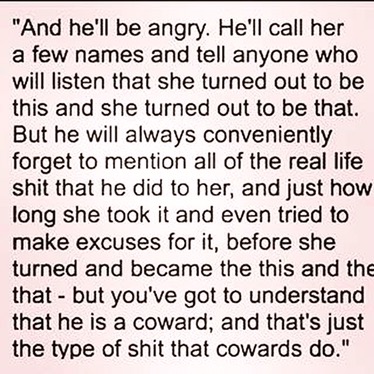 The question on all my friends and families lips right now… how do you answer such a question when each hour my feelings change so much ?

I feel weak, then remind myself what he’s put me through and realise weak I am definitely not. My world was falling apart when my baby was just 2 weeks old and I had found out about his other life! But I stayed strong for my newborn and my eldest daughter. Continued to breastfeed although the pain was unreal and developed mastitis twice. Bills were still payed and my babies were happy! That is not weak!

I feel like I miss him. I miss the loving him, the side of him that would look at me like he was absolutely smitten. The way we would joke together and laugh. The way he looked at our baby and we would all just chill in bed together cooing over how gorgeous she is. His touch which would melt me and hands down give me the best sex of my life. Then remind myself relationships isn’t just about good sex (especially when you know he’s been going elsewhere too), relationships require team work. Something he used to always drill in my head, tell me I never work with him. Tell me I’m not on his page I’m in a completely different book to him (That’s rich!) and he needs a woman he can work with. Even when his sister and mother asked him what I don’t do that he needs, he walked out the room saying ‘I can’t think right now.’ Evenings he was never around, even before the cheating again. He would answer my calls though and come home, he isn’t bright to think I would notice when those things changed! I’m lonely right now without him but I was lonely with him… so what’s the difference!

I feel angry, I keep thinking about what his mum said to me over text message. Annoyed that she asked ME to remind myself of the traumatic experience we all had when he was in HMP before. Asked ME to not get him locked again. So mad that I’m once again being the one to blame if he ends up back in jail, yet he has risked his freedom every fucking day since he was released. He doesn’t listen to you ?? So why should I ?

I feel sad that I gave him that many chances, believed him 100 million times that it was us he wanted, that he would change his ways and now it’s literally got so past breaking point that he’s not allowed near me. He will have to arrange contact for his daughter via a contact centre and that social services are also involved. I gave him many opportunities to do this as just friends, do this seperated but that just wasn’t good enough for him either. He was ok to act single but I wasn’t and he would drill into me how I’ll always be his! Them times I believed him, I didn’t want anyone else, still so sure he’d come good. Even after the cheating this time he made me agree that I would try again in the future, let him prove it to me properly. That didn’t last, since he was back to his old tricks of going between me and another girl AGAIN!

I feel bitter that this new girl has probably believed him. What a low class female she is! Accepting a man you’ve known 2 weeks, told you a fake name and cheated on his missus and baby with you! Well I have certainly more self respect than you my love and I just sleep at night knowing he’ll cause you more shit than he’s really worth!

I feel better! Getting this all out, I feel loads better!